Deprecated: File wp-db.php is deprecated since version 6.1.0! Use wp-includes/class-wpdb.php instead. in /home/kd7b54n293/public_html/wp-includes/functions.php on line 5595
 About - Eliana Burki
Skip to content Skip to main menu

The alpine horn player Eliana Burki, born in 1983 in Switzerland, is among the internationally most successful representatives of her profession. She has had concerts far beyond the borders of Europe, including the United States, South America and the Middle and Far East – and become the most sought-after ambassador of this Swiss national instrument. She has opened up a new repertoire for the alpine horn with her band I Alpinisti, and also as a soloist with the Stuttgart Philharmonic Orchestra and the Munich Radio Orchestra. She has also incorporated jazz and funk, as well as influences from the folk music of the countries she has visited. 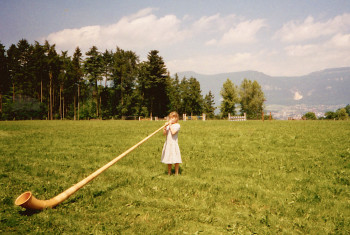 Burki was just four years old when an alpine horn ensemble playing at the finish line of a bicycle race sparked her passion for the instrument. Two years later, she convinced the legendary blower from Solothurn Hansjürg Sommer (known as the ‘pope of the alpine horn’) to take her on as his only pupil. Soon thereafter she participated in the Federal Yodelling Festival: a little girl in traditional costume that stood out among experienced men. But when Burki played a blues piece at a later yodelling festival, she failed to win over the jury. She had violated the traditional standards by playing a different genre of music.

It was nigh on impossible to dissuade the young alpine horn revolutionary from mixing the archaic sound of the alpine horn with jazzy elements modelled on Miles Davis or Jeff Bakers. She did just this on her concert tours, accompanied by their mother on piano, in Paris and Amsterdam, and at major events such as the Jazz and Blues Festival in Basel. Cooperation with other artists inspired Burki to study the French horn and singing at the jazz schools in Berne and Basel. 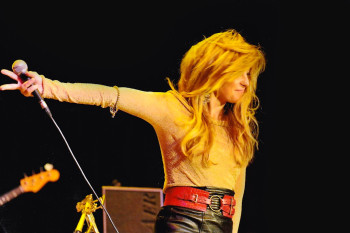 After appearances on TV shows, such as Stefan Raab, Eliana Burki became an international attraction. Her first CD “Eliana” (2003), a poppy compilation, was created together with the Canadian songwriter Gino Vannelli and took her for the first time to her adopted home in Los Angeles. Now she is one of the few Swiss musicians to have succeeded in the US music industry. One of her prominent contract partners is the Norah Jones’ record label “The Surf Dog”.

Burki released her funky second CD “Heartbeat” (2007) with the Queen producer, David Richards. The third, “Travellin’ root” (2010) was with John Boylan, the manager of the country star, Linda Ronstadt. The Swiss agency Sunmusic, which operates worldwide, is currently responsible for her concert bookings, and they also have contracts with Jimmy Cliff and Candy Dulfer. But her most important contributors for many years have been the musicians in her band “I Alpinisti”: Adriano Regazzin (Keyboard), Sam Siegenthaler (Guitar), Thomas Reinecke (Bass) and Lukas Gasser (Drums & Percussion).

Burkis’ fourth and most successful CD was born out of her passion for classical music. “Alpine Horn Symphonic” (2013) with the Munich Radio Orchestra and the Swiss conductor Johannes Schlaefli includes not only works of the symphonic alpine horn repertoire by Jean Daetwyler and Daniel Schnyder, but also her own compositions specially arranged for the orchestra (“Homesick”, “Heart of Cairo”). Eliana Burki most recently toured as an orchestral soloist with the Armenian State Orchestra in Armenia and the Stuttgart Philharmonic Orchestra in Germany; performances are planned in Switzerland with the Zurich Chamber Orchestra under Howard Griffith.

Eliana Burki finds a balance in life away from her concert work, by working as a sound therapist for children with cystic fibrosis. Furthermore, she graduated from the prestigious drama school “Beverly Hills Playhouse” in Los Angeles and has already been cast for a starring role in a French documentary film.

To meet the requirements of her life as a globetrotter, Burki has developed the “Burki-horn” with the Texan instrument maker, Jim Patterson. It is a lightweight carbon instrument that can be reduced to a transport-friendly pocket-size. It also has an attachable flap section, which frees the alpine horn from its physical sound limitations. This means that Burki can use the entire chromatic scale and be ready for all kinds of musical challenges when she is on the go.

Because home is so important to Eliana Burki, she sees the whole world as her home. The interplay between what is familiar and foreign has become the source of her creative energy – and the subject of her latest CD (to be released in spring 2015). It stylistically leans to the music of “Travelin’ root” and highlights the idea of ‘one-world’ with the collaboration of guest musicians from all over the world. 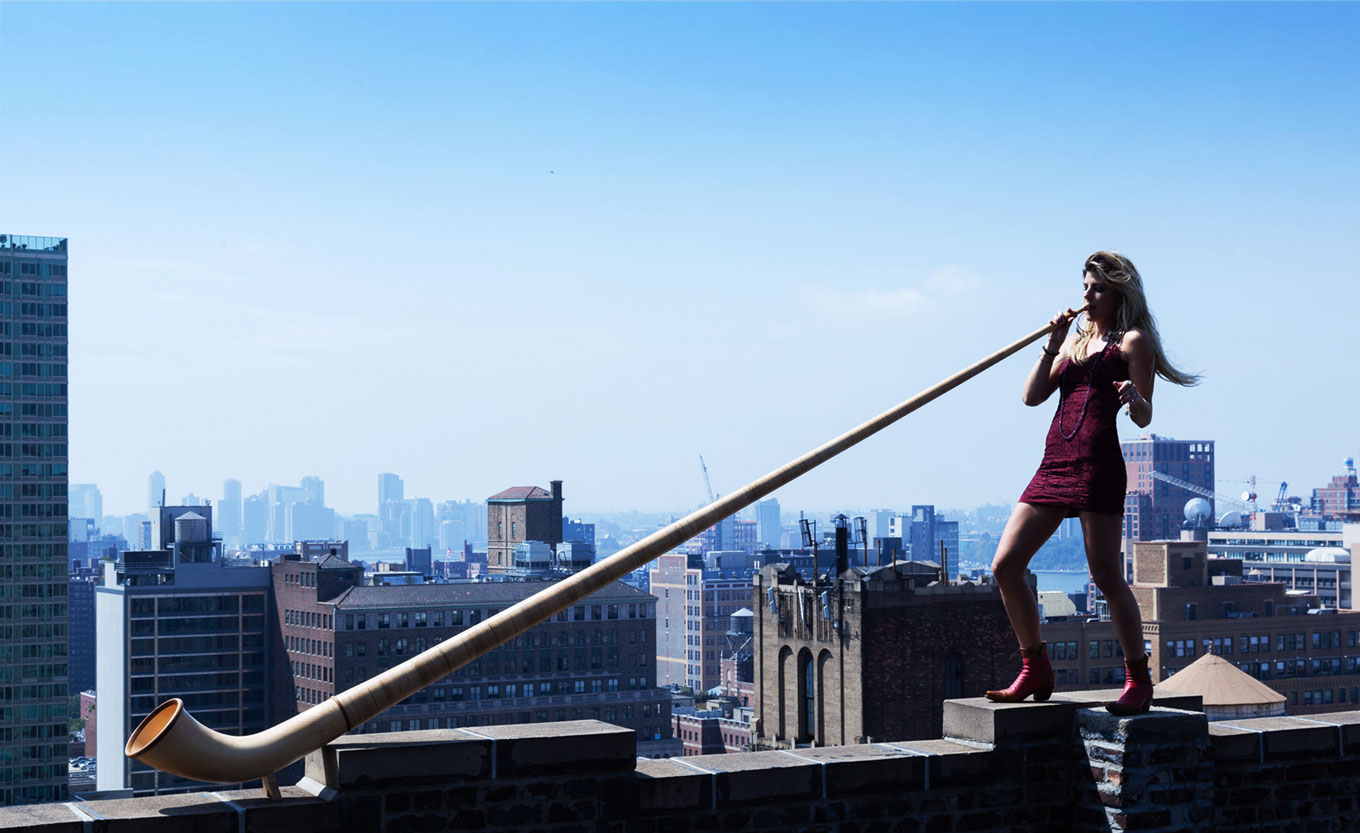